His Life In Woking 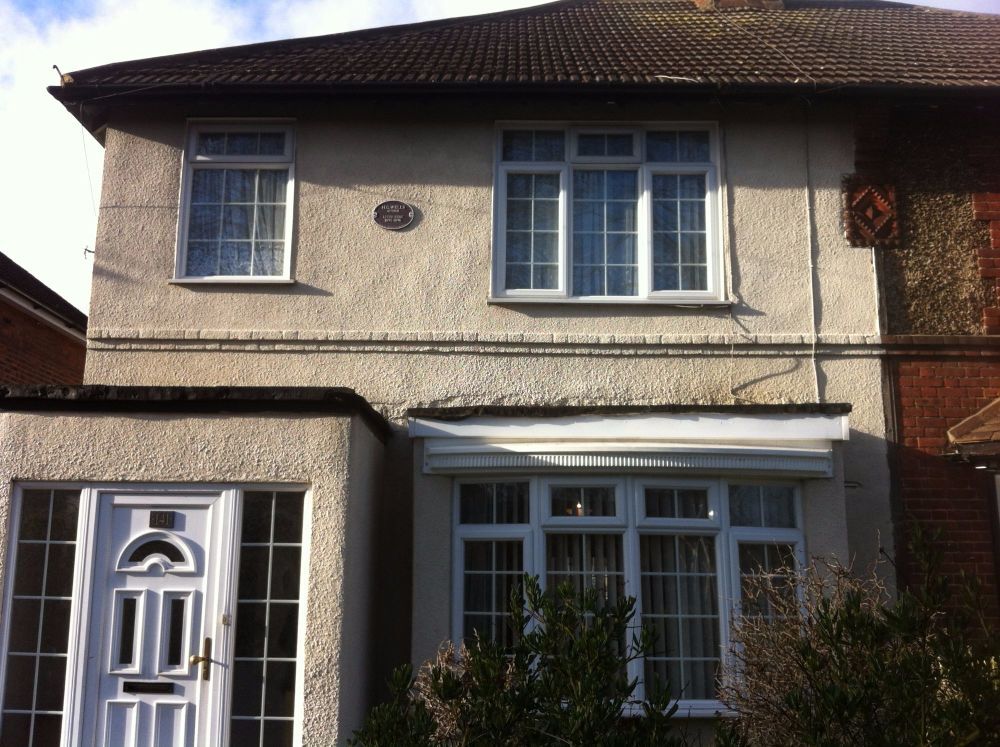 H.G. Wells arrived in Woking in May 1895. He lived at ‘Lynton’, Maybury Road, Woking, which is now numbered 141 Maybury Road. Today, there is an English Heritage blue plaque displayed on the front wall of the property, which marks his period of residence. It was while he resided at ‘Lynton’ where he spent his mornings writing, revising proofs, and dealing with correspondence, and his afternoons walking or cycling in the surrounding countryside.

Wells’ stay in Woking, though lasting less than a year and half, proved an extremely creative period perhaps the most productive, of his whole writing career. “Our withdrawal to Woking was a fairly cheerful adventure … We lived very happily and industriously in the Woking home for a year and a half.”“We furnished a small resolute semi-detached villa with a minute greenhouse in the Maybury Road facing the railway line, where all night long the goods trains shunted and bumped and clattered - without serious effect upon our healthy slumbers.”“Close at hand in those days was a pretty and rarely used canal amidst pine woods, a weedy canal, beset with loose-strife, spiræa, forget-me-nots and yellow water lilies, upon which one could be happy for hours in a hired canoe, and in all directions stretched open and undeveloped heath land, so that we could walk and presently learn to ride bicycles and restore our broken contact with the open air.” “There I planned and wrote the War of the Worlds, the Wheels of Chance and the Invisible Man … I wheeled about the district marking down suitable places and people for destruction by my Martians.”

Shortly after his arrival in Woking, he married his second wife, Amy Catherine Robbins (known as ‘Jane’), who is shown outside their house in the image below. “I learnt to ride my bicycle upon sandy tracks with none but God to help me; he chastened me considerably in the process, and after a fall one day I wrote down a description of the state of my legs which became the opening chapter of the Wheels of Chance … The bicycle in those days was still very primitive. The diamond frame had appeared but there was no free-wheel. You could only stop and jump off when the treadle was at its lowest point, and the brake was an uncertain plunger upon the front wheel. Consequently you were often carried on beyond your intentions. The bicycle was the swiftest thing upon the roads in those days, there were as yet no automobiles and the cyclist had a lordliness, a sense of masterful adventure, that has gone from him altogether now.”A creative and productive periodWhile residing in Woking, The Time Machine (1895) was published. He also completed The Island of Dr. Moreau (1896), began and wrote much of The War of the Worlds (1898) and The Invisible Man (1897), and began writing When the Sleeper Awakes.

The original idea for The War of the Worlds came during one of his walks when his brother Frank speculated about what would happen if aliens suddenly descended upon the scene and started attacking people.Read the ‘Woking and War of the Worlds’ and ‘Woking’s Wellsian Martian’ sections for more information about the influences and storyline behind this book.Also during his time in Woking, Wells wrote also The Wonderful Visit and The Wheels of Chance, a pioneering cycling novel, and started Love and Mr. Lewisham. Read the section ‘H.G. Wells: The writer in Woking’ for a timeline of his works.